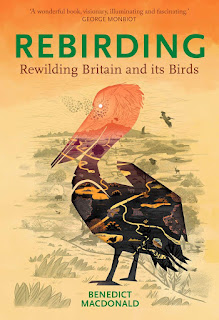 [1] The Richard Jefferies Society is a literary society and charity established in 1950 to promote the study and works of Richard Jefferies. More information at https://www.richardjefferiessociety.org/p/john-jefferies-november-1848-14-august.html

[2] The White Horse Bookshop first opened its doors in 1943 and has stood on its present site – a 16th century townhouse in Marlborough, Wiltshire – since 1949. It was bought in 2014 by local businessmen Robert Hiscox (founder of Hiscox insurance) and Brian Kingham (founder of Reliance Securities Group). http://www.whitehorsebooks.co.uk/

[3] More information about the book along with glowing quotes from other well-known naturalists and environmentalists at https://pelagicpublishing.com/blogs/news/just-published-rebirding-rewilding-britain-and-its-birds-by-benedict-macdonald
More information about Benedict Macdonald at http://www.ben-macdonald.co.uk/about-ben.html

[4] Richard Jefferies (1848–1887) is best known for his prolific and sensitive writing on natural history, rural life and agriculture in late Victorian England. Less well-known now than he deserves to be, Jefferies stands with the tradition of writers concerned with man’s relationship to the natural world – a forerunner of today’s abundance of nature writing. Perhaps his best-known works today are Bevis (sometimes described as an English Huckleberry Finn), and After London, one of the earliest works of ‘post-apocalyptic’ fiction. For further information about Jefferies life and work: http://www.richardjefferiessociety.org/p/the-life-of-richard-jefferies-with.html

The Hidden World of the Fox by  Adele Brand,  (William Collins).
Incredible Journeys by David Barrie, (Hodder and Stoughton).
The Nature of Spring by Jim Crumley, (Saraband).
On the Marsh by Simon Barnes, (Simon and Schuster).
Rebirding by Benedict Macdonald (Pelagic Publishing).
Working with Nature by Jeremy Purseglove (Profile Books).

[6] Previous winners are: Gods of the Morning by John Lister-Kaye (2015), The Wood for the Trees by Richard Fortey (2016), The Seabird's Cry by Adam Nicolson (2017) and Wilding by Isabella Tree (2018).  See http://www.richardjefferiessociety.org/p/richard-jefferies-society.html

Posted by Richard Jefferies Society at 6:29 am