HAUNTS OF THE LAPWING - winter

This article was published in January 1883 in Good Words . In November 1885, it formed one of a collection of essays in The Open Air .

Coming like a white wall the rain reaches me, and in an instant everything is gone from sight that is more than ten yards distant. The narrow upland road is beaten to a darker hue, and two runnels of water rush along at the sides, where, when the chalk-laden streamlets dry, blue splinters of flint will be exposed in the channels. For a moment the air seems driven away by the sudden pressure, and I catch my breath and stand still with one shoulder forward to receive the blow. Hiss, the land shudders under the cold onslaught; hiss, and on the blast goes, and the sound with it, for the very fury of the rain, after the first second, drowns its own noise. There is not a single creature visible, the low and stunted hedgerows, bare of leaf, could conceal nothing; the rain passes straight through to the ground. Crooked and gnarled, the bushes are locked together as if in no other way could they hold themselves against the gales. Such little grass as there is on the mounds is thin and short, and could not hide a mouse. There is no finch, sparrow, thrush, blackbird. As the wave of rain passes over and leaves a hollow between the waters, that which has gone and that to come, the ploughed lands on either side are seen to be equally bare. In furrows full of water, a hare would not sit, nor partridge run; the larks, the patient larks which endure almost everything, even they have gone. Furrow on furrow with flints dotted on their slopes, and chalk lumps, that is all. The cold earth gives no sweet petal of flower, nor can any bud of thought or bloom of imagination start forth in the mind. But step by step, forcing a way through the rain and over the ridge, I find a small and stunted copse down in the next hollow. It is rather a wide hedge than a copse, and stands by the road in the corner of a field. The boughs are bare; still they break the storm, and it is a relief to wait a while there and rest. After a minute or so the eye gets accustomed to the branches and finds a line of sight through the narrow end of the copse. Within twenty yards—just outside the copse—there are a number of lapwings, dispersed about the furrows. One runs a few feet forward and picks something from the ground; another runs in the same manner to one side; a third rushes in still a third direction. Their crests, their green-tinted wings, and white breasts are not disarranged by the torrent. Something in the style of the birds recalls the wagtail, though they are so much larger. Beyond these are half a dozen more, and in a straggling line others extend out into the field. They have found some slight shelter here from the sweeping of the rain and wind, and are not obliged to face it as in the open. Minutely searching every clod they gather their food in imperceptible items from the surface.

Sodden leaves lie in the furrows along the side of the copse; broken and decaying burdocks still uphold their jagged stems, but will be soaked away by degrees; dank grasses droop outwards! the red seed of a dock is all that remains of the berries and fruit, the seeds and grain of autumn. Like the hedge, the copse is vacant. Nothing moves within, watch as carefully as I may. The boughs are blackened by wet and would touch cold. From the grasses to the branches there is nothing any one would like to handle, and I stand apart even from the bush that keeps away the rain. The green plovers are the only things of life that save the earth from utter loneliness. Heavily as the rain may fall, cold as the saturated wind may blow, the plovers remind us of the beauty of shape, colour, and animation. They seem too slender to withstand the blast—they should have gone with the swallows—too delicate for these rude hours; yet they alone face them.

Once more the wave of rain has passed, and yonder the hills appear; these are but uplands. The nearest and highest has a green rampart, visible for a moment against the dark sky, and then again wrapped in a toga of misty cloud. So the chilled Roman drew his toga around him in ancient days as from that spot he looked wistfully southwards and thought of Italy. Wee-ah-wee! Some chance movement has been noticed by the nearest bird, and away they go at once as if with the same wings, sweeping overhead, then to the right, then to the left, and then back again, till at last lost in the coming shower. After they have thus vibrated to and fro long enough, like a pendulum coming to rest, they will alight in the open field on the ridge behind. There in drilled ranks, well closed together, all facing the same way, they will stand for hours. Let us go also and let the shower conceal them. Another time my path leads over the hills.

It is afternoon, which in winter is evening. The sward of the down is dry under foot, but hard, and does not lift the instep with the springy feel of summer. The sky is gone, it is not clouded, it is swathed in gloom. Upwards the still air thickens, and there is no arch or vault of heaven. Formless and vague, it seems some vast shadow descending. The sun has disappeared, and the light there still is, is left in the atmosphere enclosed by the gloomy mist as pools are left by a receding tide. Through the sand the water slips, and through the mist the light glides away. Nearer comes the formless shadow and the visible earth grows smaller. The path has faded, and there are no means on the open downs of knowing whether the direction pursued is right or wrong, till a boulder (which is a landmark) is perceived. Thence the way is down the slope, the last and limit of the hills there. It is a rough descent, the paths worn by sheep may at any moment cause a stumble. At the foot is a waggon-track beside a low hedge, enclosing the first arable field. The hedge is a guide, but the ruts are deep, and it still needs slow and careful walking. Wee-ah-wee! Up from the dusky surface of the arable field springs a plover, and the notes are immediately repeated by another. They can just be seen as darker bodies against the shadow as they fly overhead. Wee-ah-wee! The sound grows fainter as they fetch a longer circle in the gloom.

There is another winter resort of plovers in the valley where a barren waste was ploughed some years ago. A few furze bushes still stand in the hedges about it, and the corners are full of rushes. Not all the grubbing of furze and bushes, the deep ploughing and draining, has succeeded in rendering the place fertile like the adjacent fields. The character of a marsh adheres to it still. So long as there is a crop, the lapwings keep away, but as soon as the ploughs turn up the ground in autumn they return. The place lies low, and level with the waters in the ponds and streamlets. A mist hangs about it in the evening, and even when there is none, there is a distinct difference in the atmosphere while passing it. From their hereditary home the lapwings cannot be entirely driven away. Out of the mist comes their plaintive cry; they are hidden, and their exact locality is not to be discovered. Where winter rules most ruthlessly, where darkness is deepest in daylight, there the slender plovers stay undaunted.

Posted by Richard Jefferies Society at 8:41 am 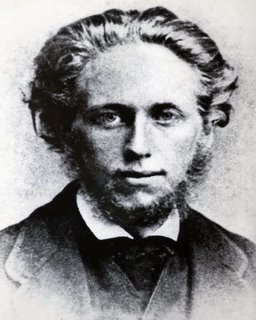 22 years of age
Posted by Richard Jefferies Society at 8:37 am