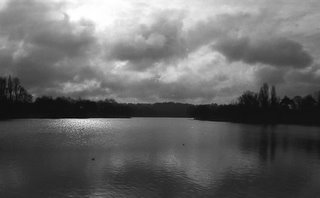 "We will find a new sea where no one has ever been before. Look! there it is, is it not wonderful?" said Bevis.

Thanks to Ray Morrison for supplying this recent atmospheric view of Coate Water.
Posted by Richard Jefferies Society at 12:23 pm

'Early in March' was first printed in the 'Standard' on 31 March 1879 and then incorporated into Hodge and his Masters in the Chapter entitled "Hodge's Field".

Email ThisBlogThis!Share to TwitterShare to FacebookShare to Pinterest
The Wiltshire World of Richard Jefferies

The Spring edition of This England includes a super article entitled:

It is written by Terry Gray and he examines Jefferies' life and works as part of an on-going series of articles on Literary Landscapes of England..