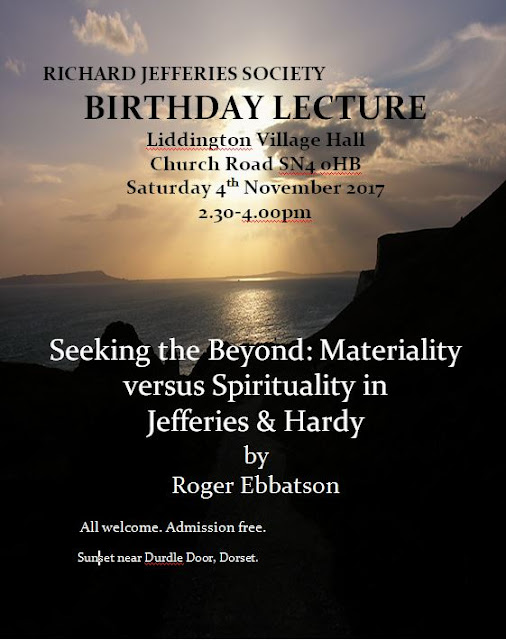 Roger Ebbatson writes: My talk will endeavour to offer a comparative juxtaposition of selected writings by Jefferies and Hardy dealing both with the social and agrarian issues experienced by the workfolk during the Great Depression and, in a countervailing movement, with the more inward personal experience of spiritual aspiration and an intuitive sense of ‘the Beyond’. The focus will be on The Dewy Morn, set in comparison and contradistinction with Hardy’s Tess of the d’Urbervilles. Whilst Jefferies, in his final essays, moves away from social issues towards a more inward and transcendental mode of thought, in Tess of the d’Urbervilles in a countervailing movement the heroine’s innate spirituality is progressively negated and undermined by her life-experiences, her rape/seduction and subsequent marital abandonment leading her towards the culminating communal immiseration of the field-workers at Flintcomb-Ash, followed by her arrest at Stonehenge and subsequent execution. The social consciousness exhibited, for instance, in Jefferies’ ‘The Wiltshire Labourer’ or ‘After the County Franchise’ is also powerfully articulated in the final tragic stages of Hardy’s novel, both writers’ diagnosis chiming with the Marxian account of change in the Victorian countryside, whilst Jefferies’ more mystical final phase, which is not echoed in Hardy, may be more productively framed by reference to the Heideggerian concept of ‘the Open’.

Roger Ebbatson is Visiting Professor at Lancaster University, a Fellow of the English Association, and a Vice-President of the Tennyson Society. He has written extensively on Richard Jefferies, beginning with Lawrence & the Nature Tradition (1980), and subsequently in An Imaginary England (2005), Heidegger’s Bicycle (2006), Landscape & Literature (2013), and most recently, Landscapes of Eternal Return (2016) that will be reviewed in the next RJS Journal (Summer 2018).

Posted by Richard Jefferies Society at 7:05 am