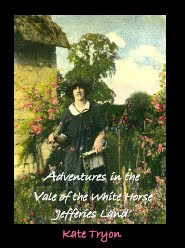 American tourist Kate Tryon visited ‘Jefferies Land’ six times in the early 1900s. She was an ardent admirer of the nature writing of Richard Jefferies and followed his philosophy of life. Having re-read his works many times, she wanted to capture scenes on canvas that had inspired the author’s words set around Jefferies’ birthplace and home – a small dairy farm at Coate, next to Coate Water, set in the foothills of the downs. Her first visit to Swindon took place in 1910. She wrote: ‘The lark, the nightingale and Richard Jefferies – those are the three things that brought me to England.’

Kate Tryon (1864-1952) was born in the small village of Naples in Maine, USA. She was a popular lecturer on the birds of New England and England. She studied art at the Boston Museum of Fine Arts and painted over two hundred scenes during her visits to the Swindon area. In 1963, thirty five of these oil paintings were shipped from America and donated to the Richard Jefferies Museum at Coate by her daughter, where most of them can still be seen today.

The artist’s grand-daughter, Kate Schneider, visited Coate in September 1997. She donated her grandmother’s account of her first visit. Sheila Povey, local historian and member of the Richard Jefferies Society, showed the American visitor around the Richard Jefferies Museum and has documented the memoir by adding photographs taken by Mrs Tryon and of her paintings. The book entitled Adventures in the Vale of the White Horse: ‘Jefferies Land’ has been published in a limited edition of 100 soft-back copies. There are over 100 photographs including 27 reproductions in colour of Mrs Tryon’s paintings – from grand houses such as Burderop House and Upper Upham House to thatched cottages and churches, from bluebell woods at Hodson to the downs.

"The book is a charming memoir – the writing is fluent, relaxed and often amusing. She knows her Jefferies thoroughly and her quotes and allusions are always apposite. As an American she takes a wry, oblique but deeply affectionate look at English rural society just before the outbreak of the First World War and dispenses much valuable information about the people and places she meets."

The book is now out of print but it can be downloaded as a pdf.
Posted by Richard Jefferies Society at 4:23 pm