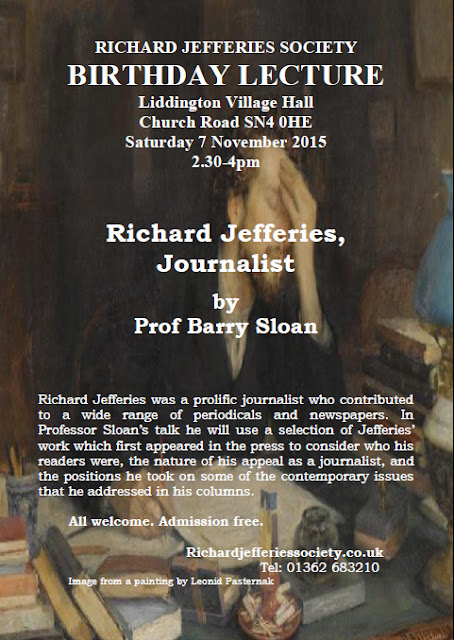 Richard Jefferies was a prolific journalist who contributed to a wide range of periodicals and newspapers, including some of the best known titles of his day. In Professor Sloan’s talk he will use a selection of Jefferies’ work which first appeared in the press to consider who his readers were, the nature of his appeal as a journalist, and the positions he took on some of the contemporary issues that he addressed in his columns. Was he progressive or reactionary, sentimental or pragmatic in his views of the changes taking place in rural life and work, and on the relationship between the country and the town or city? How do Jefferies’ views compare with those of some of his fellow rural commentators, and how did they change over time?
Prof Barry Sloan is based in the English department of the University of Southampton. He is currently preparing material for a book which draws on the periodical press, and the work of agricultural writers such as Alexander Somerville, James Caird and H. Rider Haggard, and of cultural commentators such as William Howitt, Richard Jefferies and George Sturt, to examine the history of the social/cultural representations of the agricultural labourer in England from the 1830s to 1914.
Posted by Richard Jefferies Society at 6:19 am