There were sixteen nominations for the award. The final shortlist is:

The winner was selected at the Richard Jefferies Society's Executive Council meeting on Saturday 13 May 2017. The prize is £1,000. The winner will be announced at an event at the White Horse Bookshop on 3 June 2017. 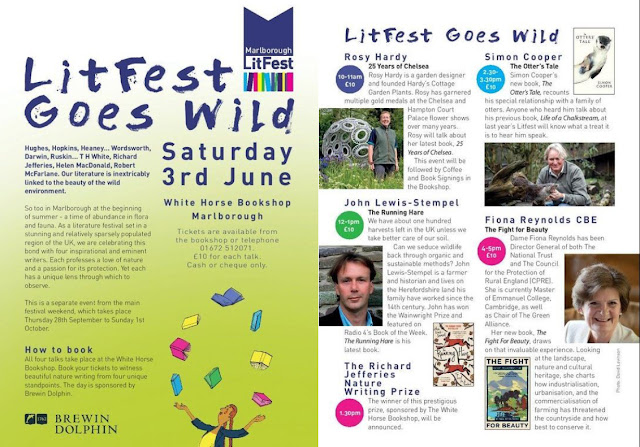 The seasons and how they affect the flora and fauna of the United Kingdom feature heavily in shortlisted books for the Richard Jefferies and White Horse Bookshop Literary prize, which rewards outstanding nature writing. Palaeontologist and broadcaster Richard Fortey, historian and farmer John Lewis-Stempel, journalist Ann Wroe, mountaineer and film-maker Graham Hoyland and poet and wildlife expert Jim Crumley now compete for the £1,000 Prize, which will be awarded in June.

Richard Jefferies Society Chairman, John Price, said the shortlist reflected a very British obsession – the seasons: “We have a very personal relationship with the seasons – we are a county whose citizens are never more than a few miles from beautiful countryside, and where the weather is a very unifying national obsession. Our shortlisted writers have tapped into that relationship in original, intimate ways that both illuminate and entertain. Richard Jefferies would be proud of this list, of that I am sure.”

In The Nature of Autumn (Saraband), Jim Crumley writes about the season’s effects on wildlife and landscape, while in Walking Through Spring (William Collins) Graham Hoyland follows the season north as it unfolds along his walk from the South Coast to the borders. The changing seasons have an impact on every aspect of the beech-and-bluebell wood that is the subject of Richard Fortey’s The Wood for the Trees (William Collins), and John Lewis-Stempel’s The Running Hare (Doubleday) looks at the importance of traditional ploughland to nature and wildlife. Finally, Ann Wroe ruminates on the influence of light in nature, from her own perspective walking the downs and coastline of East Sussex, and from that of other writers, painters and scientists, in Six Facets of Light (Jonathan Cape).

Angus Maclennan, Manager of co-sponsor, Marlborough’s White Horse Bookshop, said: “Nature writing is more popular than it has been in years, no surprise given the quality of the writing evident in this year’s shortlist. It is important, and it will last.”

The Prize will be awarded to the author of the publication considered by the judging panel to be the most outstanding nature writing of the last year, with the winning work reflecting the heritage and spirit of Jefferies’ countryside books. The winner will be announced on 3rd June, 2017, at a ceremony in the recently opened gallery at The White Horse Bookshop, Marlborough.

About Richard Jefferies
(John) Richard Jefferies (1848-1887) is best known for his prolific and sensitive writing on natural history, rural life and agriculture in late Victorian England. Less well-known now than he deserves to be, Jefferies stands in tradition of writers concerned with man's relationship to the natural world – a forerunner of today's abundance of nature writing. Perhaps his best-known works today are Bevis (sometimes described as an English Huckleberry Finn), Round About a Great Estate, and After London, one of the earliest works of 'post-apocalyptic' fiction.

About the Prize
John Webb, one of the Richard Jefferies Society's most active members, died in 2014. He left the Society a legacy that will be used as a memorial to him: The Richard Jefferies Society Writers' Prize commenced in 2015. The inaugural winner was John Lister-Kaye for Gods of the Morning (Canongate).
For further details, please visit: http://www.richardjefferiessociety.org
About the White Horse Bookshop


The White Horse Bookshop first opened its doors in 1943 and has stood on its present site - a 16th century townhouse in Marlborough, Wiltshire - since 1949. It was bought in 2014 by local businessmen Robert Hiscox (founder of Hiscox insurance) and Brian Kingham (founder of Reliance Securities Group). It was named Wiltshire Life Small Business of the Year in March 2017. http://www.whitehorsebooks.co.uk/
Posted by Richard Jefferies Society at 6:20 am