Peter Bainbridge is organising a guided walk around the John Moore Museum, the Merchant’s House, the Old Baptist Chapel and to places associated with Moore in Tewkesbury along with a talk about John Moore. The charge will be £8.00 per person. The Museum is closed between 1-2pm.

Simon Lawton, the Curator, has suggested that he gives his talk about John Moore first and that would take place in the Chapel. There will be time to visit other places of interest in Tewkesbury and take lunch there. Allow for a 4pm finish. 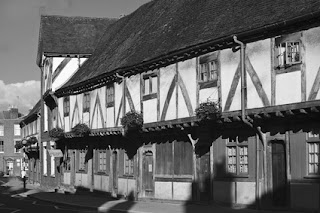 The John Moore Museum is nestled in a row of historic timber-framed buildings close to the Abbey in Tewkesbury. The museum was established in 1980 in memory of the writer and naturalist John Moore. Today it is also home to an extensive Natural History collection featuring specimens of mammals and birds native to the British countryside, woodlands, wetlands and farmland. A few doors away is The Merchant’s House, a two storey building which has been restored and furnished to show the construction of a 15th century shop and dwelling. The museum has also recently taken over the management of the Old Baptist Chapel, originally a late Medieval Hall house which was later converted for use as a non-conformist meeting house, that will be open to the public after May this year.
Posted by Richard Jefferies Society at 7:04 am