Richard Jefferies was born on 6th November 1848. Each year the Richard Jefferies Society celebrate his birth with a Lecture as part of the Annual General Meeting.  This year Rebecca Welshman from the University of Exeter will speak on the subject of "Imagining Archaeology: nature and landscape in the work of Richard Jefferies." 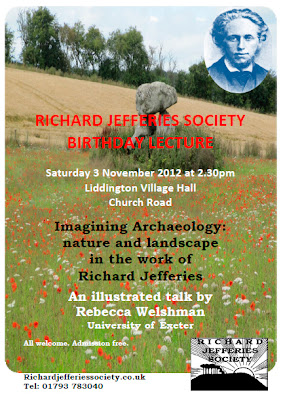 The details are as follows:


Subject: ‘Imagining Archaeology: nature and landscape in the work of Richard Jefferies.’

The Birthday Lecture this year will be given by Rebecca Welshman. It presents her research on Jefferies that has arisen during the course of her Doctorate at the University of Exeter. 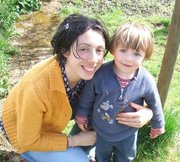 Rebecca gained her BA and MA at the University of Liverpool. Her research interests lie in the relationship between identity and place, nature and mind, and prehistory. Her publications include Thomas Hardy and the Jurassic Coast (co-authored in 2010), and the chapters 'Archaeology' in Thomas Hardy in Context, ed. Phillip Mallett (Cambridge University Press, 2012), and ‘“Dreams of Celtic Kings”: Victorian Prehistory and the Notion of ‘Celtic’’ in Mysticism, Myth and Celtic Identity, ed. Gibson, Trower and Tregidga (Routledge, 2012). She has also published the following journal articles: ‘Imagining the Ancient Britons’ in Victoriographies (2012), ‘Literature and the Ecological Imagination: Richard Jefferies and D.H. Lawrence’ in Victorian Network (2011), and ‘Hardy and the Bronze Age’ in The Thomas Hardy Journal (2008). She co-edited a new anthology of Jefferies’ works with Hugoe Matthews in 2010, and her article on Jefferies and Hardy, ‘Imagining Archaeology during the Great Agricultural Depression’, will soon be published in The Journal of Literature and Science.


Liddington Village Hall is next to Liddington Church, Church Road, just off the main B4192 road from Commonhead Roundabout, at Swindon, to Aldbourne. There is ample parking space at the hall and the Village Inn (that serves food from 12am to 2pm – ( 01793 790314) is a short walk away.


Liddington can be approached by road from the A419 trunk and M4 motorway Junction 15. Take the first exit north on the A419 next to the new Great Western Hospital and turn right at Commonhead Roundabout taking the B4192 to Liddington. Progress up the hill passing a staggered cross-roads. Church Road is a few yards further up the hill on the right hand side.


Buses (Routes 46 to Hungerford & 48 to Marlborough) run between Swindon Bus station (the bus should leave from Bay 9, but watch out for changes) and through Liddington village. There are two possibilities available for use on Saturday morning: one that arrives early and the other just on time. The 46 leaves Swindon Bus Station at 10.40am and arrives at Liddington at 10.57am. The earlier bus (48) leaves at 9.45 and arrives at 10.02. Regular and frequent buses run from Fleming Way in Swindon town centre to the Great Western Hospital (including numbers 11 and 16). For the brave and fit, there is a stiff 2km walk from the hospital up the hill to Liddington.