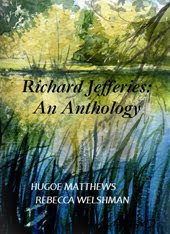 This new anthology of extracts from Jefferies' writing is selected by Hugoe Matthews and Rebecca Welshman. It aims to highlight his broad, exploratory, and sometimes unpredictable nature in his works. The authors have focused primarily on short quotations which read well independently, and longer passages which demonstrate the context, the quality of the writing, or the flow of Richard Jefferies’ thoughts and observations. Where possible the selections are chronological and show a shift in the emphasis of his work from the 1870s, which focused largely on practical subjects such as farming and rural life, to his later work of increased sensitivity and perception of the natural world. Thereby they have sought to reveal the organic continuity and calm objectivity of Jefferies’ writing, which was present from his teens and addressed a diversity of subjects during an extraordinary era of change, illuminating both the man behind the words, and the times in which he lived.

The Anthology is published in a case-bound, thread-sewn book of 266 pages.