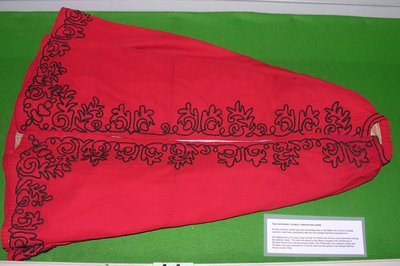 Richard Jefferies' mother gave this christening robe to Mrs Bathe, presumably after her own children had been christened in it.

Henry Williamson [author of Tarka the Otter], a Jefferies’ devotee, visited Coate in 1925 and 1937. He described Mrs Bathe as a ‘straight seeing’ little woman who lived in a ‘tarred cot’ opposite Coate Farm.

Mrs Bathe lived to 93 years of age and died in 1948. She had 16 children all of whom were christened wearing the Jefferies' cloak. It was passed to Mrs Bathe's daughter (Mrs Whitbread of Newport Street) who was the youngest child. Mrs Whitbread’s two children (Arthur and Norman) were also christened in it and the robe was then gifted to the Richard Jefferies Society in the 1950s. It was shown at a meeting and then disappeared. It was discovered in May 2006 that the robe had been stored at Bath Road Museum and wrongly attributed to Alfred Williams. The scarlet cloak was returned to the Jefferies’ Museum.

On learning about the robe Norman’s son, Ian, visited the Museum on 7 May 2006. Fascinated by the story he questioned the name ‘Bathe’ as his grandmother’s name was Goddard [not related to the land-owners]. So, did Henry Williamson get the name wrong or did Mrs Bathe marry again? And, did the colour of the cloak inspire The Scarlet Shawl?

Posted by Richard Jefferies Society at 8:56 am