Some of the trees, planted around 1820–30 by Richard Jefferies’ father, still flourish in the gardens of the Richard Jefferies Museum at Coate. The copper beech is magnificent, and the mulberry still produces an excellent crop.  Sadly, the russet apple tree, that featured so affectionately in many of Richard Jefferies’ books, died in 1999 but not before cuttings were taken to preserve the old, unknown strain.

The Richard Jefferies Society successfully grafted a cutting on to a crab apple seedling which grew into a productive tree in Mark Daniel’s Brighton garden. Further cuttings were taken from this tree and several members raised saplings in their own garden, one of which was planted back near the original tree in the Jefferies’ garden.

Mr. Daniel also supplied the Brogdale Horticultural Trust near Canterbury with a specimen apple for DNA testing but they could not match it with any registered varieties. Official registration of the title was taken up recently by Marcher Apple Network, a national charity run by volunteers. They wanted to submit this apple for consideration to be accredited and registered with the name ‘Richard Jefferies Russet’. They described the apple as ‘a pale greenish–yellow, moderately firm, a little coarse, crisp, dry yet juicy, not acid, with sweetness and pleasant flavour, no aroma.’

As of November 2021 the apple is  now officially recognised as unique and is recognised with Jefferies’ name attached along with his beautiful nature-writing works. 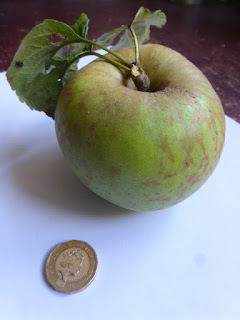