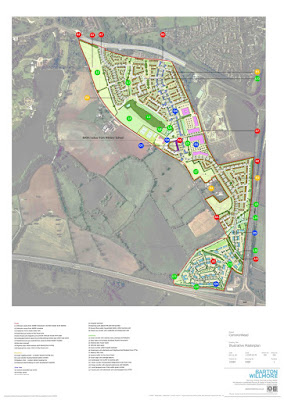 The new year has brought news of a revised planning application to build 890 houses and offices on Jefferies Land alongside Dayhouse Lane, and near to the Richard Jefferies Museum and Coate Water.

You can read more about it on the Jefferies Land Conservation Trust's news site and there is a sample letter that you might send:


I have looked at the recent revision to the planning application submitted by Redrow Homes and Persimmon Homes to develop countryside at Coate and Badbury Wick. The minor tinkering with the proposals has done nothing to allay my concern that it is unacceptable development in its own right by virtue of the nature, scale, layout and location of the buildings. It will still set a precedent for infill houses and offices to be built on fields between the application area and Broome Manor. The majority of the business park area is still on the Coate Water side of Dayhouse Lane whilst some of the houses and the school also open out onto Dayhouse Lane. This is not a contained and isolated design that will discourage further growth.


On being questioned about the revised planning application, Councillor Greenhalgh was quoted in the Swindon Advertiser on New Year’s Eve as saying: ‘This proposal is the best one I think that has been put forward for this general area ... I think this development will protect the character of Coate Water and should prevent building between this land and Coate itself.’ How does opening up an area that has been protected from housing and office development since about the 1950s suddenly act as a stop for more of the same? It will clearly have the opposite effect that will be encouraged by the land-owners of the fields around Coate Water who have been waiting to sell their land to developers since the Science Park proposals over 25 years ago. Indeed that building proposal was far less intrusive in the environment – yet Swindon Council was opposed to it and so was the Secretary of State. Redrow Homes and Persimmon Homes still have legal options to buy these fields if planning permission is granted.


Swindon Borough Council has proved that it can’t be trusted to keep any promises – first the hospital – that was to be a one-off building complex for the area between Coate Water and the A419/M4; then the university with the promise that if the university wasn’t built, there would be no housing and now this statement from Councillor Greenhalgh (the senior cabinet Member for strategic planning) who is clearly in favour of the latest plans.


Over 52,000 people have expressed their concerns and wish to see the countryside between Coate Water and the A419/M4 protected against further development. Please listen to the people and refuse planning permission.
Posted by Richard Jefferies Society at 10:45 am